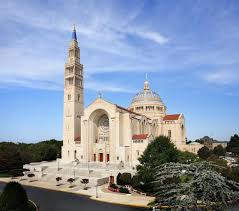 When it was dedicated a half-century ago, it bespoke a self- confident Catholicism, at home in America and proud to display its Marian piety and its considerable resources. Today, a building that has aged remarkably well and improved in the process makes two important theological statements that are worth pon- dering on this golden anniversary.

The first statement was unmistakably clear the day the Shrine opened to the public. Its interior was unfinished, save for one colossal icon—the great apse mosaic of Christ come in judgment, which rivets the eye from the moment the pilgrim enters the nave. That image of a stern, majestic Christ was an appropriate “fit” for a Ro- manesque-Byzantine structure; but it was also a challenge to the saccharine Jesus being peddled by preachers of the “power of positive thinking” in 1959. This Christ makes you think, all right—about the seri- ous business of life, about rendering an account of one’s stewardship one day, about the awe-inspiring majesty of Jesus Christ, king of the universe.

Some found it shocking, in 1959; others find it startling today. The icon’s most important theological statement, however, is not so much a warning as a reminder: all true devotion to Mary points us to her Son, as Our Lady herself did in her last words in the Gospels—”Do whatever he tells you…” And by pointing us to her Son, who is both Son of God and Son of Mary, Our Lady points us, through the Incarnation, into the second great mystery of Christian faith: the mystery of the Most Holy Trinity. The royal road to the great truths of Chris- tianity begins with Mary’s “yes” to Gabriel’s unexpected visit.

The Shrine makes its second important Marian theological statement in a more recent addition to its decoration: the great sculpture of the “universal call to holiness” which, spanning the length of the basilica’s back wall, depicts a rich panorama of modes of Christian life and sanctity. The universal call to holiness was one of the great themes of the Second Vatican Council’s Dogmatic Constitution on the Church: no matter what their station in life or their state of life in the Church, all the baptized are called to be saints—for becoming a saint is the fulfillment of our human and Christian destiny. Looking at the cosmic Christ in judgment, we are reminded of the source of sanctity in the Church; looking at holiness exemplified in the Body of Christ as we leave the basilica, we’re reminded of the extraordinary range of God’s re- deeming and sanctifying grace as it enlivens disciples.

And the Marian angle here? Mary is the first disciple, because her fiat, her “yes” to the divine plan, sets the pattern of all Christian discipleship. As John Paul II, borrowing from Hans Us von Balthasar, said in 1987, there are many “profiles” of the Christian life in the New Testament: the Petrine profile sets the pattern for the Church of authority and jurisdiction, as the Pauline profile does for the Church of proclamation and evange- lization and the Johannine profile does for the Church of contemplation. The Marian profile, however, is most basic: for everything else in the Church—authority, proclamation, contemplation— exists to serve the deepening of discipleship and the call to holiness that comes from conversion to

Christ. And the primordial profile of the Christian disciple’s life is set by two paradigmatic expressions of Mary’s discipleship: the articulated fiat of the Annunciation, and the silent fiat at the foot of the cross.

The Shrine is the largest Catholic structure in the western hemisphere. More importantly, though, it provides one of the Americas’ richest experiences of Catholicism, aesthetically, litur- gically, and musically—a catechism in stone, mosaic, and glass, and a noble act of homage to the patroness of the United States.

George Weigel is the Senior Fellow of the Ethics and Public Policy Center, a Roman Catholic theologian and one of America’s leading commentators on issues of religion and public life. Reprinted with Permission.