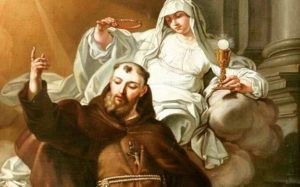 Every month , the International Catholic Stewardship Council writes about a Saint who lived a stewardship way of life. We will begin to share these examples each month, so we too can lear how to bear witness to the Gospel in our lives. For more information, http://catholicstewardship.com/.

Given the name Mark Rey at his birth in 1577, our stewardship saint for April grew up in Sigmaringen, a town located in presentday Germany. He was the son of the town’s affluent burgomeister (mayor) and studied law and philosophy at the renowned University of Freiburg. As a student, Mark made prayer a priority in his daily life. He also spent time visiting the sick. He embraced a humble, chaste and simple lifestyle.

He earned a doctorate in canon and civil law, became a prominent lawyer and soon gained a reputation for representing those who had no money to pay. Mark was affectionately nicknamed “the poor man´s lawyer.” He was known to be extraordinarily generous, and committed himself to working with the poor.

Dismayed by the greed and corruption he found among his counterparts in the legal profession and in the courts of law, Mark abandoned his law practice and entered the Capuchin religious community. He took the name Fidelis, which is Latin meaning “faithful.” He studied for the priesthood and after ordination, celebrated his first Mass in 1612 on the feast of Saint Francis of Assisi (October 4).

After his ordination, Father Fidelis was assigned to preaching and hearing confessions. It was reported that a large number of converts were accepted into the Church because of his zealous evangelizing efforts. He was devoted to Saint Francis of Assisi and revealed that devotion in his pastoral care of the poor and sick. During a severe epidemic in a city in which his friary was located, he cared for and cured many.

In 1621 Father Fidelis was sent to begin missionary work in Switzerland, a territory that had experienced much bloodshed as a result of growing tensions among a number of religious movements of the expanding Reformed traditions. All of these movements were violently opposed to the Catholic faith at the time. His writings, preaching and pastoral ministry converted many in Switzerland to Catholicism. But many others, enraged by his missionary work, threatened his life. On April 24, 1622, while traveling on the road between preaching missions, Father Fidelis was attacked by a group of armed men, beaten and hacked to death. He was 44 years old. Fidelis once wrote: “It is because of faith that we exchange the present for the future.” He was canonized in 1746 and his feast day is April 24.