What makes the Cathedral church different from all other churches in a diocese? It is not a question of beauty or architecture or size or liturgical style. The simple answer to the question is one item: the cathedra or bishop’s chair from which a cathedral derives its name. Throughout history, chairs have been used as a symbol of authority, both in the Church as well as in secular society.

The pope’s cathedral in Rome is the Cathedral of the Most Holy Savior and of Saints John the Baptist and the Evangelist in the Lateran, or popularly known as St. John Lateran or simply as “the Lateran.” 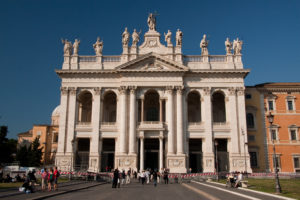 It was gifted by the Emperor Constantine to the Church sometime in or after the year 313. In 324, Pope Sylvester I formally dedicated the Lateran as a place of worship, placing the cathedra of the Bishop of Rome inside of it.

Before our parish was the Cathedral Parish, it was known as Immaculate Conception Parish until the Holy See moved the see (seat) of our diocese to Springfield from Alton in 1923. The newly appointed diocesan bishop, Bishop Griffin, chose the church of Immaculate Conception Parish to be the pro-cathedral (temporary) until a new and larger cathedral church and complex could be constructed.

When our current church and plant were completed in 1928, it became the new location for the parish church as well as the mother church of the diocese by being designated as the Cathedral. 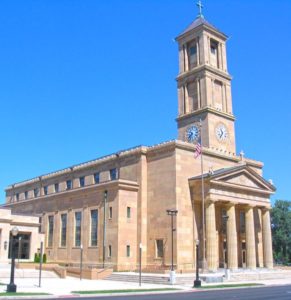 Sometimes you will hear of churches referred to as basilicas, which is a different designation from a cathedral, although some cathedrals are basilicas, such as the Cathedral Basilica of St. Louis in the Archdiocese of St. Louis. A basilica is a church that is given a special honorific designation by the pope, generally for its historical or its artistic merit. Basilicas have a few special privileges attached to them such as a special bell called a tintinnabulum and a special red and yellow umbrellino (umbrella), which bears the coats of arms of the pope, diocesan bishop, and others historically connected to the particular basilica. Almost all basilicas are termed minor basilicas. There are only four major basilicas, one being in the Vatican State and three in Rome: St. Peter’s in the Vatican, St. John Lateran, St. Paul’s Outside the Walls, and St. Mary Major. The Lateran has the distinction of being an archbasilica because it is the oldest of the four major basilicas.

In the next edition of The Weekly, we will look at some of the unique features of how Mass is celebrated by the bishop, especially here in the Cathedral.