A few weeks back I wrote in this column about what makes a cathedral a cathedral and I followed that article up with an article discussing a cathedral as being the bishop’s church and, therefore, “mother church” of the diocese. Being that a cathedral has that unique designation, you will at times unique liturgies and Masses celebrated at the cathedral. Even regular Sunday Masses when the bishop is celebrant are different, more “solemn” some might say or “higher.” This is because the bishop is the fullness of the priesthood, standing in the place of Christ our High Priest.

Masses where the bishop is the celebrant are traditionally termed “pontifical,” coming from the Latin word pontifex for “bridge builder.”

All bishops share this title, including the pope who is known as pontifex maximus (the greatest bridge builder), because their life and ministry are to be a bridge to Christ for all people.

At Mass, the bishop’s vesture is similar to what a priest wears, but with a few distinctions. A bishop makes use of a pectoral cross that he traditionally wears under his chasuble (outer vestment), but may also be worn over it. The cross is called a pectoral cross because it is to be worn at chest level in proximity to the bishop’s heart, keeping the mystery of the Lord’s Cross intimately close to him. At Mass, the cross is suspended from a green and cold silk cord. Outside of Mass or other liturgies, the pectoral cross is suspended from a chain for daily use. 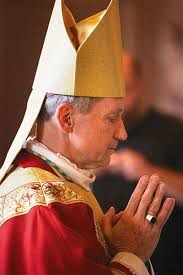 At his ordination, a bishop is given three specific symbol s of hi s episcopal office that he wears or uses at Mass. The first piece of vesture that is unique to a bishop is his episcopal ring. Like the pectoral cross, a bishop wears his ring not just at Mass but always. The ring is a two-fold symbol. First, it is a symbol of his office and the authority that comes with it. Second, even though the bishop wears his ring on his right hand, it is also a symbol of his spousal relationship with the Church.

The second piece of vesture that a bishop wears is his miter. The miter is a tall, pointed hat with two lappets that drape down the back. The miter is white, gold, or some variation of either color, and may be adorned. For funerals and penitential seasons, the miter is supposed to be plain white. The shape of the miter is meant to evoke a flame, a reminder of the gift of the Holy Spirit given to the Apostles at Pentecost. The lappets that drape down the back of the miter are symbols of the two Testaments of the Scriptures. Before the reforms following the Second Vatican Council, there were stricter and more specific norms governing color, material, and heights for miters, depending on the ritual and liturgical season. 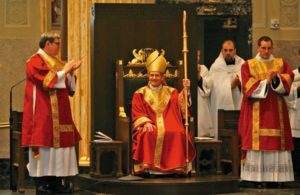 The third symbol used by a bishop at Mass is his crozier or pastoral staff. Resembling an elaborate shepherd’s staff, the crozier is symbol ic of the bishop’s sacred duty as head of the flock that is his diocese. The bishop makes use of the crozier since he stands in the place of Christ the Good Shepherd. Interestingly, a bishop outside of his own diocese may not use a crozier without the permission of the diocesan bishop of wherever he is. It was formerly the practice that when a bishop carried a crozier in another diocese that he carried it backwards, with the crook facing towards him, to show that he was not the chief shepherd in that place. Today this custom is no longer followed.

Besides his cross and the three unique signs of his office previously mentioned, the bishop also wears a magenta zucchetto or skullcap on the crown of his head. The color of the zucchetto is key as it denotes the rank of the one wearing it; priests may wear a black zucchetto for certain occasions. At more solemn Masses, such as ordinations, the bishop also wears the vesture of all three ranks of Holy Orders. Along with the symbols of his episcopal office, and under the chasuble worn by bishops and priests, he also wears a dalmatic, the outer-sleeved vestment worn by deacons. He wears the vesture of all three offices because he is the fullness of the priesthood.

These are a few of the distinctions that you will notice when Bishop Paprocki celebrates Mass in the Cathedral, and in other parishes throughout the diocese. We find that none of these symbols or items of vesture are “just because” but that each of them has a sacred and symbolic value concerning our Faith and the mysteries that we celebrate.