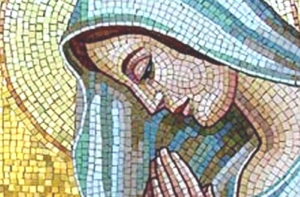 This Sunday the Church stands in between two wonderful liturgical commemorations of the Blessed Mother: the Solemnity of the Assumption and the Memorial of the Queenship of Mary. The belief that Mary was taken body and soul into heaven has been held by the faithful since the early years of the Church, but Pope Pius XII only recently defined the dogma itself in 1950.

Tradition holds that Mary died in the presence of the Apostles except for St. Thomas. After the Apostles had placed Mary into her tomb, Thomas returned and wanted to look upon her face one last time. The tomb was opened, but Mary’s body was not there, presumed by the Apostles to have been taken to heaven. From earliest times, the Church has understood that, having lived a life of total discipleship that was free from any trace or stain of sin, the Lord Jesus commanded that the effects of death and decay would not defile Mary’s body from which he had taken his own human nature.

While Mary was the recipient of a gift of redemptive grace from the moment of her conception, her own discipleship was not a passive reality. Throughout her entire life, Mary cooperated with the grace given to her by God. She placed her total trust in God and that trust moved her to act. The same should be true for us. We are called to place our trust each day in the goodness of God. If we truly trust in his promises, we should then be moved to active and intentional discipleship.

Mary’s life was in no way easy. She had to trust God and cooperate with his grace when the world around her would have advised her otherwise. Her discipleship meant that she also had to share in the mystery of the Cross, but her faith was not confounded. Having lived a life of fidelity to God’s will, Mary was taken to heaven and crowned Queen of Heaven and Earth. Where she has gone, we, her adopted children, hope to follow. God has given us a wonderful model of discipleship in Mary. Through her intercession may we experience an increase in faith to move us to act on the grace given us by God so that we may seek his will in all things. Finally, having persevered faithfully in this earthly life, may we join with Mary and all the saints in the praise of God forever in the heavenly kingdom.