When I was going through school, the devil was presented to us as a myth, a literary device, a symbolic manner of signaling the presence of evil in the world. I will admit to internalizing this view and largely losing my sense of the d e v i l a s a r e a l spiritual person. What shook my agnosticism in regard to the evil one was the clerical sex abuse scandal of the nineties and the early aughts. I say this because that awful crisis just seemed too thought-through, too well-coordinated, to be simply the result of chance or wicked human choice. The devil is characterized as “the enemy of the human race” and particularly the enemy of the Church. I challenge anyone to come up with a more devastatingly effective strategy for attacking the mystical body of Christ than the abuse of children and young people by priests. This sin had countless direct victims of course, but it also crippled the Church financially, undercut vocations, caused people to lose confidence in Christianity, dramatically compromised attempts at evangelization, etc., etc. It was a diabolical masterpiece. 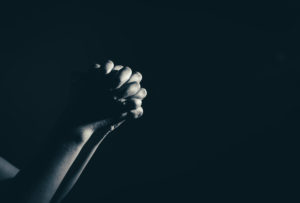 Sometime in the early aughts, I was attending a conference and found myself wandering more or less alone in the area where groups and organizations had their booths. I came over to one of the tables and the woman there said, “You’re Fr. Barron, aren’t you?” I replied affirmatively, and she continued, “You’re doing good work for the Church, but this means that the devil wants to stop you. And you know, he’s a lot smarter than you are and a lot more powerful.” I think I just mumbled something to her at that moment, but she was right, and I knew it. All of this has come back to me in the wake of the Archbishop McCarrick catastrophe. St. Paul warned us that we battle, not against flesh and blood, but against “powers and principalities.” Consequently, the principal work of the Church at this devastating moment ought to be prayer, the conscious and insistent invoking of Christ and the saints.

Now I can hear people saying, “So Bishop Barron is blaming it all on the devil.” Not at all. The devil works through temptation, suggestion, and insinuation—and he accomplishes nothing without our cooperation. If you want to see the principle illustrated, Google Luca Signorelli’s image of the Antichrist in the Orvieto Cathedral. You’ll see what I mean. Archbishop McCarrick did wicked things and so did those, it appears, who enabled him. And we have to come to terms with these sins.

Before I broach the subject of how to do this, permit me to say a few words about unhelpful strategies being bandied about. A first one is indiscriminate scapegoating. The great philosopher René Girard taught us that when communities enter into crisis, people typically commence desperately to cast about for someone or some group to blame. In the catharsis of this indiscriminate accusation, they find a kind of release, an ersatz peace. “All the bishops should resign!” “The priesthood is a cesspool of immorality!” “The seminaries are all corrupt!”

As I say, these assertions might be emotionally satisfying at some level, but they are deeply unjust and conduce toward greater and not less dysfunction. The second negative strategy is the riding of ideological hobby horses. So lots of commentators— left, center, and right—have chimed in to say that the real cause of the McCarrick disaster is, take your pick, the ignoring of Humanae vitae, priestly celibacy, rampant homosexuality in the Church, the mistreatment of homosexuals, the sexual revolution, etc. Mind you, I’m not saying for a moment that these aren’t important considerations and that some of the suggestions might not have real merit. But I am saying that launching into a consideration of these matters that we have been debating for decades and that will certainly not admit of an easy adjudication amounts right now to a distraction.

So what should be done? The United States Conference of Catholic Bishops (USCCB) has no juridical or canonical authority to discipline bishops. And even if it tried to launch an investigation, it has, at the moment, very little credibility. Only the Pope has juridical and disciplinary powers in regard to bishops. Hence, I would suggest (as a lowly back-bencher auxiliary) that the bishops of the United States—all of us—petition the Holy Father to form a team, made up mostly of faithful lay Catholics skilled in forensic investigation, and to empower them to have access to all of the relevant documentation and financial records. Their task should be to determine how Archbishop McCarrick managed, despite his widespread reputation for iniquity, to rise through the ranks of the hierarchy and to continue, in his retirement years, to function as a roving ambassador for the Church and to have a disproportionate influence on the appointment of bishops. They should ask the ecclesial version of Sen. Howard Baker’s famous questions: “What did the responsible parties know and when did they know it?” Only after these matters are settled will we know what the next steps ought to be.

In the meantime, and above all, we should ask the heavenly powers to fight with us and for us. I might suggest especially calling upon the one who crushes the head of the serpent.