This weekend the Church celebrates the Solemnity of Our Lord Jesus Christ, King of the Universe, popularly referred to simply as “Christ the King.” This Sunday is also the last Sunday in Ordinary Time and the last summer of the Church year. The Church year begins anew next Sunday, the First Sunday of Advent. Pope Pius XI established the Solemnity of Christ the King in 1925 in response to an increasing rise in secularism and extreme nationalism. The purpose of this solemnity is to remind us of the Lord Jesus’s sovereignty over everything: society, government, nations, families, and individuals.

The Gospel for the feast this year is taken from the eighteenth chapter of St. John’s Gospel with Pilate’s interrogation of Jesus. The encounter between the Lord and the Roman Procurator juxtaposes two opposing views of kingship: earthly and heavenly. First, Pilates hows contempt for the Jewish people in answer to Jesus’s question about how Pilate knows about him. Pilate knows what he knows about Jesus primarily by being informed by the chief priests who have brought Jesus to Pilate. Pilate is a poor governor who sees no need to be involved in the details of the lives of the people he is responsible for. The opposite is true of Jesus who, while Lord of heaven and earth, is intimately concerned about each and every one of us. 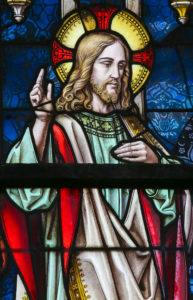 Next, the two continue their interchange about the Lord’s kingship, focusing on the Lord’s kingdom. Jesus is clear to Pilate that his kingdom is not of this world, but this is a concept that is beyond Pilate who is only concerned with the cares of the world and its allurements. The same was true for Herod when Jesus was born. The newborn king had neither designs on Herod’s throne nor any design on Roman power some thirty-plus years later. The Kingdom of God must first be established in the hearts and minds of people before it takes any temporal form. When the Kingdom is firmly established in our lives then it will naturally occur in the world at large.

Finally, the two arrive at the question of truth. Jesus states: “for this I was born and for this I came into the world, to testify to the truth. Everyone who belongs to the truth listens to my voice.” There is no way to unpack the richness of the Lord’s statement in this small space. The truth that Jesus speaks of is the Father’s desire for all creation to live in peace and right relationship with him, totally free from sin and death. In fact, Jesus is the embodiment of the Father’s desire in that he is the ultimate sacrifice that makes this right relationship possible, thus Jesus is rightly called “the Truth” itself (see John 14:6).

The interchange between Jesus and Pilate shows us that Jesus is ultimately an inconvenient truth for Pilate. He is not prepared to accept the Truth that Jesus proclaims because, to be able to do so, Pilate must accept the fact that life is not about him, his desires, or his whims. The same is true for us. For Christ to truly reign in our lives, we must be prepared to accept him and what he asks completely: not “mostly, ”not“ everything but a small portion,” but 100% and nothing less. Only when we accept Jesus and his Kingship completely into our lives will his reign be established in us and then in the world.