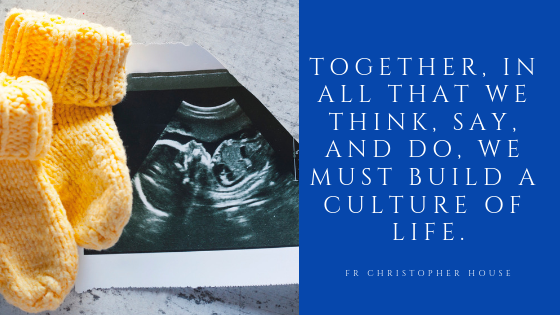 Who is next? This question was posed by Father John Jenkins, president of the University of Notre Dame, in a February 8th statement from him regarding recent pro-abortion legislation in New York State. Father Jenkins writes that New York state legislators passed and its governor signed into law a bill sweeping away protections for unborn — and some born — children. New York law now allows abortions any time up until delivery for vaguely defined reasons of “health,” including social well-being. The legislators removed from law provisions that require the mother’s consent, that allow manslaughter charges against an abortionist who causes the woman’s death during an abortion, that discourage self-induced abortions and — shockingly — that require care for a child born alive during an attempted late-term abortion. The New York law has been described by abortion rights advocates as an ‘inflection point’ that will add momentum for expanded access to abortion in seven other states. We can also add our own state of Illinois to that number since in recent days four Illinois legislators have announced their intention to present legislation in this state similar to that in New York and our governor has stated that he wants Illinois to be “the most progressive state in the nation” when it comes to what he terms as “reproductive rights.”

Since this legislation was signed into law by the governor of New York on January 22, the anniversary of the Roe V. Wade decision, pundits from all aspects of the political spectrum have weighed in as well as others, including theologians and other personalities and so on. This matter was compounded by the remarks of the governor of Virginia who stated that children born alive could be killed in certain circumstances after consultation between doctors and families. In a sea of comments and opinions, let us not lose sight of what God has said on this issue through his holy word: the word of the Lord spoken through the prophet Jeremiah: “before I formed you in the womb I knew you (1:5);” the word of the Lord spoken through the prophet Isaiah: “can a mother forget her infant, be without tenderness for the child of her womb? Even should she forget, I will never forget you. See, upon the palms of my hands I have engraved you (49:15-16);” the word of the Lord spoken through the psalmist: “you (Lord) formed my inmost being, you knit me together in my mother’s womb. I praise you because I am wonderfully made (139:13-14).”

Too often, men and women have bought into the lie of “choice” because of the claim that this will make life better for some…that access to abortion is better for society…that it is “merciful.” In the latter half of 2017, several news stories appeared talking about how Down syndrome was vanishing in Iceland and Denmark, not because of any medical advancement, but because of prenatal screening and the use of abortion. The Gospel today warns us about settling only for the things of this world; of thinking that one can find a utopia here and now. It will not work. A truly perfect society can only be achieved by striving after the things of heaven and true perfection is something that our society fails to recognize. Have you ever been blessed to spend time with someone who has Down syndrome or with children with other special needs? Yes, there are lots of labors of love that must be given by those who care for them, but, if you want to see the face of God, if you want to experience his love in a profound and unconditional way, you will see and find it in these children of God. It is a profound tragedy that many in our society cannot see or understand this.

We have seen failed attempts at man-made perfect societies before. This June we will mark the 75th anniversary of the Normandy invasion, when brave soldiers, airmen, sailors, and marines fought to destroy the evil cast into the world by Hitler’s Germany. Our armed forces saw the full horror of the Nazis when Dachau, Auschwitz-Birkenau and other camps of the like were liberated. We like to assure ourselves that those are events locked in history, that it could never happen here…but it already has and is in abortion clinics around this country, at Planned Parenthood right here in Springfield.

As Catholics we must always stand for the unquestionable truth that human life is sacred and that it must always be defended, especially the life of the unborn who are the most innocent and the most vulnerable among us. Standing for this truth will not always be popular, but this is not about popularity or politics, about parties or agendas or personal philosophies, it is about a divine truth written into the natural law that life is sacred because life is the act and the gift of God. If you find in your personal life that the faith and politics are at odds with each other then, for the good of your salvation, let the faith win out; there is no political platform or agenda that is going to get any of us into heaven. Regrettably, if Catholic politicians who support the evil of abortion find themselves separated from the Church through a denial of Holy Communion or even excommunication because of their own actions then so be it; these are meant to be medicinal remedies to illicit a change in actions or behaviors and the hope is that these remedies do not remain permanent. Some may feel that this is harsh but there is no more sacred human right than the right to life, especially for the unborn, and abortion is a direct violation of that right. Let us pray for all in government, and for ourselves, to embrace the Gospel of Life over a culture of death.

Together we must build a culture of life. The Supreme Court cannot rule for it and the Congress ultimately cannot legislate it. Yes, the government can and must act in ways that will support a culture of life and strengthen it but human dignity and human rights are granted by God alone, not the state. This culture must be built by everyday ordinary people. This is done by recognizing and respecting the God-given dignity in each person, by seeing people for who they are as children of God and therefore our sisters and brothers – not as a means for our own use or pleasure or as an obstacle or burden. Concerning abortion, sometimes new life comes into the world because of horrific evils such as rape or other sins against human dignity, but allowing a second moral evil in the destruction of an innocent human life will not erase the first evil. For us to simply say no to abortion isn’t enough.

We as the Church must say yes to life and put that yes into action. We must make sure that we are giving people avenues and possibilities to make that same yes for life. If you or someone you know is considering abortion and feels there are no other alternatives, please come to me, or one of the Cathedral clergy, or someone on the Cathedral staff and we will find other ways. If at some point you have made the wrong choice concerning abortion or if you have helped someone to make the wrong choice, know that God has not stopped loving you and that you are not beyond his mercy and his forgiveness.

Together, in all that we think, say, and do, we must build a culture of life. In the Book of Deuteronomy, the Lord says to Moses and to the people “I call heaven and earth today to witness against you: I have set before you life and death, the blessing and the curse. Choose life, then, that you and your descendants may live, by loving the LORD, your God, obeying his voice, and holding fast to him (30:19).”