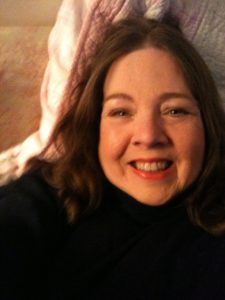 [This article was originally published May 2, 2017, link below]

“If there’s a bustle in your hedgerow, don’t be alarmed now. It’s just a spring clean for the May Queen.”

Those of us living in the Midwestern United States have had a springtime in which it really feels that we “know that all creation is groaning in labor pains…” (Romans 8:22) After a disappointingly mild winter – the disappointment being the lack of a picture book “White Christmas”- which ended in several weeks of multiple snowstorms, the wintery gloom and chill have dragged on. The groundhog who predicted an early spring should look into a new career. The labor of the earth bringing forth new life has been painfully stalled. At last, there have been some blessedly warm days, finally bringing the beauty of buds on the trees and the first flowers of spring. On the sixth Sunday of Easter, I can look out my window and safely say that spring has sprung. Though I wouldn’t say I’m packing away my winter coat just yet.

Each spring I enjoy one of the happiest perks of my job as a church secretary: a good perch for viewing the procession of school children to the annual May Crowning. There are the eighth graders, trying to look casually grown-up as they wait for one of their own to crown the statue of the Blessed Mother. We are always especially touched by the gravity of the second graders, wearing their First Communion clothes for a second time. They are so pious and serious as they walk past in single file. I think of the impression this is making on their young hearts, helping form a lifetime of devotion to the mother of Our Lord. 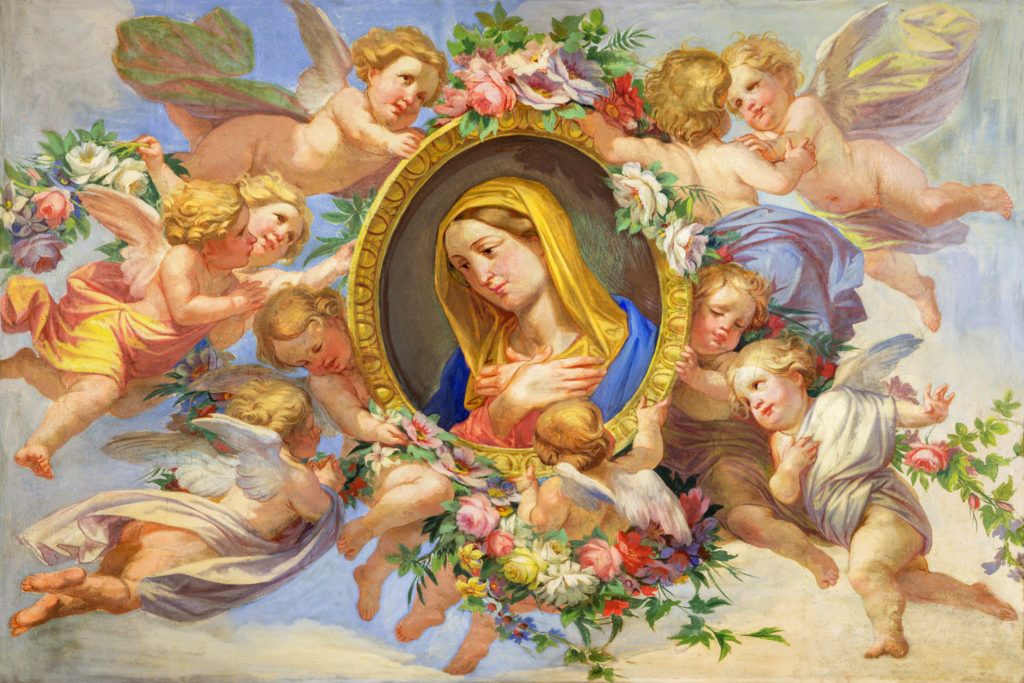 The popular Marian hymns sung at May Crownings tend to be treacly in their sentimentality. But I’ll give these sweet tunes a pass here, as they help ingrain an unforgettable devotion. A friend of mine brings Holy Communion to an elderly shut-in who just celebrated her 100th birthday. Many conversations in these calls are one sided; but a visit last week, on the first of May, had more animation. My friend began with a mention of the date and started to sing “Bring Flowers of the Rarest.” And she was joined by her usually quiet companion as the tune brought back memories of May devotions in years gone by: O Mary! We crown thee with blossoms today, Queen of the Angels, Queen of the May.

May Day and other May festivities provide a prime example of a pagan holiday sanctified rather than suppressed by our Church. In agrarian societies, the life-giving rebirth and blossoming of nature was something to be heartily celebrated. In “The Bad Catholics Guide to Good Living,” author John Zmirak elaborates on how “the Church never tried to quash these festivities, only to steer them gently in a more Christian direction.” It follows naturally that the celebration of spring be given over to a celebration of Mary. As Gerard Manley Hopkins wrote in The May Magnificat: Ask of her, the mighty mother: Her reply puts this other Question: What is Spring?— Growth in every thing—

The primal concerns celebrated in spring are now steered towards honoring the ultimate act of new life for humanity, in a woman whose cooperation with God allowed the Word to become flesh and dwell among us. Some say that pagan celebrations have been ‘tamed’ or ‘laundered’ into Christian celebrations, but there is nothing bland nor safe in what we celebrate. We celebrate God’s Love. Love that was willing to become one of us, grow like one of us, and finally suffer the agony of the Cross for our redemption.

Since I became a Catholic over twenty years ago, I have had a special affection for May’s Marian devotions. I always felt a little ‘robbed’ of the beautiful May Crowning, as my children had been in our parish’s religious education program, which wrapped up at the end of April. The May Crowning has been strictly an event for the children of the parish school.

When we began homeschooling our children, I wanted to have our own May Crowning and to begin a special tradition of honoring Mary in a special place in our home during Mary’s month. Our “school sized” forty-four inch statue of the Blessed Mother was a gift that my husband and I gave to each other. I had found it on eBay, looking to find a substantial statue of Our Lady with a bit of money that I had put aside. When the bidding got frantic at the end of the auction, my husband offered to double the amount as an early anniversary present.

The statue took over six weeks to arrive; the delay so long that a friend of mine was sure that I had been scammed. But arrive it did, looking worse for the wear, with its hands fractured off. It was obvious that the hands been bumped, jostled, and glue back together over the years. I set about to reverse the affects of a bad repainting. Someone with an intent to modernize the statue had painted the face, hair, and hands white, leaving only the blue cloak for contrast. I was grateful that whoever did the job ran out of paint and/or ambition before getting to the base of the statue, leaving the original paint on the cherubs, globe, and evil serpent (complete with juicy apple!) being crushed under Our Lady’s heel. It was the stunning base of the statue that caught my eye when I was cyber-shopping, crying out for someone to give it a little help.

The project took all that I knew about painting plus years of knowledge acquired flipping through fashion magazines and hanging around the Clinique counter. It was more of a cosmetic makeover than paint job – and I wanted it to be dignified, subtle, and worthy of the subject. And after painting, repainting, retouching and regluing one hand that was broken off – again! – in the process, Our Lady was ready to take her place at our first May Altar.

These things never go quite as I imagine they should. Not having years of large-scale Marian devotions behind them, my older daughters were mortified by the large statue moved into a prominent place in the living room. That first year the May altar was quite visible through the living room window. I didn’t mind. In fact, if you have a forty-four inch statue, why not share it with the world! But for image conscious teenagers, it took a bit of getting used to. They said it looked ‘ethnic,’ though no one was sure what ethnicity to pin it on. (May Altars first became popular throughout the countries in the southern part of Europe, i.e., the Catholic countries. They are also known to pop up in Ireland.) Perhaps the ethnicity they were thinking of is “Catholic” — as in, unapologetically Catholic with the appropriate devotion to Mary, the Mother of God.

That is the kind of grousing one gets from teenagers who want so much to be like the rest of the crowd. If everyone else had May Altars, ours might not have been big enough or prominent enough. It’s all a matter of contrast. Now the family is used to it. Maybe still not 100% on board. It is not easy to be present at the beginning of a family tradition; it is so much easier to grow up remembering that something has “always been done that way.”

Out in the yard, many flowers have names of Marian significance (marigolds, anyone?) and most others have alternate names honoring the Blessed Virgin. The Mary Garden is another springtime exercise in honoring Mary that has found a resurgence in popularity. Plantings in a Mary Garden create an earthy shrine for meditation on the lives of Mary and Jesus. I have clipped articles, read websites, and planted a Mary Garden in my mind. My tangible experience is pretty much limited to marigolds, but just knowing the symbolism behind the random flora of our garden is another way of appreciating the beauty of the created world in which God was made flesh.

Long before the child Jesus picked his first dandelion for Mary (or whatever was the Holy Land equivalent of the iconic American child’s love offering), people had been celebrating the rebirth of life each spring. Our Church has made this time of celebration its own and made this a blessed time to honor the woman full of Grace. May Crownings, May Altars, and Mary Gardens are a deliberately “ethnic” and proud way of celebrating our faith. At my house, Catholic is what we are now – and we set aside the month of May for remembering Our Lady in this lovely, verdant way.

Our full hearts are swelling, our glad voices telling The praise of the loveliest, Rose of the vale.

Ellyn von Huben is a native of Wisconsin. Never one to keep her opinions to herself, her interests in the Church, family issues, and an eclectic array of topics led to her branching out into blogging, writing, and speaking. Ellyn lives in the suburbs of Chicago, and still has her ‘day job’ as an administrative assistant in a large Catholic parish on Chicago’s North Shore.

During the month of May, we will be sharing Catholic Marian prayers with you in the Weekly. We hope this will enhance your devotion to Mary, our Blessed Mother.

Remember, O most gracious Virgin Mary, that never
was it known that anyone who fled to thy protection,
implored thy help, or sought thine intercession was
left unaided.
Inspired by this confidence, I fly unto thee, O Virgin of
virgins, my mother; to thee do I come, before thee I
stand, sinful and sorrowful. O Mother of the Word
Incarnate, despise not my petitions, but in thy mercy
hear and answer me.
Amen.

The prayer, traditionally attributed to St. Bernard of Clairvaux, gets its name from the first word of the original Latin prayer. However, the prayer as we know it today is actually found within a much larger prayer to the Virgin Mary entitled Ad sanctitatis tuae pedes, dulcissima Virgo Maria(“At your holy feet, most sweet Virgin Mary”).

The Memorare was popularized by another Bernard, Fr. Claude Bernard, in the 17th century. Fr. Claude believed that the recitation of the prayer was the cause of his miraculous healing. He printed over 200,000 leaflets with the prayer on it in different languages to distribute wherever he could.

St. Francis de Sales said the prayer daily and St. Teresa of Calcutta taught others to pray it when they most needed help. Mother Teresa would pray it whenever she was faced with an emergency situation and most needed a miracle. It never failed her and has proven its miraculous character over the years through thousands of testimonials.