I’ve always been a sucker for some good slapstick humor (growing up on Ace Ventura and Wayne’s World), and Wreck-it Ralph has been a welcome addition to our children’s movie library.

In the Wreck-It Ralph sequel, Ralph Breaks the Internet (spoilers ahead), Venellope’s game Sugar Rush is about to be unplugged. The steering wheel for the console was broken after Ralph tried to change up the driving course to make it more exciting for her. After discovering that a replacement steering wheel was up for auction on eBay, Ralph and his best friend venture into the internet to save Sugar Rush, beginning an epic adventure.

There’s a lot of fun and humor that ensues, but the lightness takes a turn when Venellope discovers an online racing game called Slaughter Race. She discovers a new method of racing where everything is new and finds a desire to leave Sugar Rush and move to the online game permanently. In an effort to keep Venellope from leaving the arcade, Ralph finds a virus that he hopes will make Slaughter Race boring.

This is the part that struck me. The virus scans the new game and says over and over, “Searching for insecurities. Searching for insecurities.” The first scan hones in on Venellope’s glitch and then distributes that glitch all around her. With her insecurity taking over the game, the game is rebooted, causing Venellope to abandon the race for fear of deletion. She is in despair and thinks it is all her fault until Ralph reveals that he is the one who uploaded the virus. They fight, and Venellope tells Ralph that she never wants to see him again, sending him into grave despair. The thing he wanted to save is now taken from him because of his failure to choose the good for the other.

In that despair, the virus escapes from the game into the online world and begins to scan for insecurities. Its sight sets on Ralph, calling him a “100% insecurity.” Then the virus clones a lot of insecure Ralphs to infiltrate the internet.

This is the motus operandi of the enemy: identifying our insecurities and making them larger than life.

He prowls the earth “like a roaring lion searching for whom he may devour” (1 Pet. 5:8), and for a lion to devour someone the person would have to be vulnerable to the attack, would have to be insecure, even if just for a moment.

With Ralph, the virus (enemy) takes his insecurity and makes it much louder and much larger than it actually is.

Take our nagging insecurities. You’re a bad parent. You’re not good enough. You can’t do this. You don’t have the ability to be successful. The enemy latches onto that insecurity and makes it larger than life.

So the virus multiplies “Ralph,” but each of these new insecure Ralphs are a fraction of who he really is—only his insecurity multiplied.

At one point, the real Ralph approaches the search bar (Mr. Nosemore) and exasperatingly asks, “How did this happen?” And the search bar replies that if insecurities are left unchecked they can “destroy friendships.”

The enemy not only hones in on my insecurities but, if left unchecked, the insecurities can become so large that they begin to define who I am. Then, we allow them to direct our lives, to ruin our relationships, to breed insecurity instead of extending healing.

In the fourteenth rule of discernment from St. Ignatius of Loyola, he writes that the enemy “behaves as a chief bent on conquering and robbing what he desires: for, as a captain and chief of the army, pitching his camp, and looking at the forces or defenses of a stronghold, attacks it on the weakest side, in like manner the enemy of human nature, roaming about, looks in turn at all our virtues, theological, cardinal and moral; and where he finds us weakest and most in need for our eternal salvation, there he attacks us and aims at taking us.”

Like this virus in Ralph Breaks the Internet, the enemy of human nature, according to the fourteenth rule, walks about the “walls” of your heart, seeking out the insecurities and attacks through that weakness.

After Ralph’s insecurity is multiplied and distributed in the internet, it begins to attack everyone in search of Venellope. The loss of her friendship was the reason of his insecurity—losing her, being alone, was the foundation of his weakness. I think it even hearkens back to the initial Wreck-It Ralph film—perhaps losing her would affirm what he thought all along: “I’m just a bad guy.” A bad guy doesn’t have friends.

Ralph tells Venellope to save herself and she asks what he will do. And he says, “I got a date with the man in the mirror.” Isn’t that the way to combat the enemy?

Facing the man in the mirror means that we must look within and fortify those weaknesses. If you take the insecurities and reinforce them with the truth—that you are made in the image and likeness of God, that you are beloved, that you are adored by him whom we adore—then the weaknesses disappear within his grace. Often when we find our weaknesses, we hide them. We shy away from them and not only believe them to be our definition but retreat into the isolation that the enemy extends to us (see rule thirteen). This weakness must be only mine. No one else is weak like this. If I tell anyone, they’ll think I’m crazy. So what does Ralph do? What should we do in the face of the enemy?

He goes into this literal giant of his insecurities. He tries to kill the virus by sheer force but realizes that the only way to overcome the insecurity is to speak truth into the weakness.

Ralph’s fear was losing his friend and the suffering it may cause. In his confronting of the virus, he says, “You just have to let her go. It will hurt . . . a lot.” Then, as he finds peace in self-gift, of letting his friend go to pursue her dreams possibly without him, the virus disappears.

We must do the same. We must look our insecurities in the face and correct the lie. Weaknesses, insecurities, times when we think we are less, must be recognized for the false truth that they are.

Recognizing the lie of the enemy comes from habitual introspection, perhaps with the help of spiritual direction and/or retreat. It also requires true friendship with someone with the ability to speak the truth of our belovedness into our lives, especially when the insecurity seems daunting and we forget who we are. We must have someone to remind us of our belovedness, for it is only the beloved who can see the belovedness of others. That friendship is the start of true evangelization.

Rachel Bulman is a wife, mother of 4, speaker, and blogger. She enjoys seeking truth, finding beauty, rediscovering the goodness in all things; and answering the call to holiness through her life as a beloved daughter of God. Find more of her work at RachelBulman.com.

During the month of May, we will be sharing Catholic Marian prayers with you in the Weekly. We hope this will enhance your devotion to Mary, our Blessed Mother.

My soul magnifies the Lord,
and my spirit rejoices in God my Savior,
for he has regarded the low estate of his handmaiden.
For behold, henceforth all generations will call me blessed;
for he who is mighty has done great things for me,
and holy is his name.
And his mercy is on those who fear him
from generation to generation.
He has shown strength with his arm,
he has scattered the proud in the imagination of their hearts,
he has put down the mighty from their thrones,
and exalted those of low degree;
he has filled the hungry with good things,
and the rich he has sent empty away.
He has helped his servant Israel,
in remembrance of his mercy,
as he spoke to our fathers,
to Abraham and to his posterity for ever. 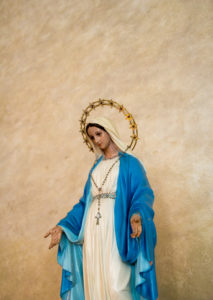 Scripture contains this prayer of Mary’s joy and wonder at her role in the mystery of the Incarnation.

The Church recites this beautiful prayer daily at Evening Prayer (Vespers) in the Liturgy of the Hours.