A few weeks ago, thirty-seven of us on the Cathedral pilgrimage to the Holy Land were able to visit Capernaum on the north shore of the Sea of Galilee. Capernaum was the home town of St. Peter and St. Andrew and became an adopted home of Jesus. We were blessed to stand in the ruins of an ancient church built on the foundation of Capernaum’s ancient synagogue. It was in this synagogue that Jesus gave one of his most famous teachings which is found in the sixth chapter of John’s Gospel and known as The Bread of Life Discourse. Jesus repeats himself several times in this discourse, commanding us to feed on him, to literally eat his flesh and drink his blood. This is not figurative language; this is John’s exposition on the Eucharist.

This weekend we celebrate the feast formally titled the Solemnity of the Body and Blood of Christ, but popularly known as Corpus Christi. Every time the Church gathers to celebrate the Mass, the Eucharist, which is the body, blood, soul, and divinity of our Lord, is at the center of our worship. We must avoid the danger of growing lax in our reverence and awe due to our familiarity with this great and wonderful sacrament, which is one reason why the Church dedicates a particular day of solemnity to focus solely on this mystery. The Eucharist is the life source of the Church, the ultimate manifestation of Christ’s presence among us, and it has been the strength of the faithful for the Church’s entire history.

In this Sunday’s Gospel, Jesus’s feeding of the five-thousand is recounted for us which happened at another site a few miles from Capernaum called Tabgha and that the pilgrims were able to visit The transformation of those five loaves and two fish, meager as they were, reminds us that our simple gifts of bread and wine, when changed by the power of the Holy Spirit, become something new and wonderful in the Eucharist. In the Church of the Multiplication at Tabgha, there is a famous mosaic on the floor of two fish but only four loaves. The absence of the fifth loaf in the mosaic invites us to raise our eyes to the Blessed Sacrament present either on the altar or the tabernacle and to see that it is Jesus who is the true bread who continually comes down from heaven in the Eucharist. 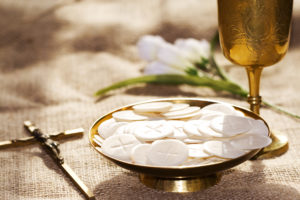 This past winter, Father Stock offered a three-part series on the 20th century American Catholic writer Flannery O’Connor. Amongst her writings is a letter where Flannery recounted being invited to a dinner party and feeling out of place in a group of she termed “intellectuals.” She went on to say that she said nothing all night until the conversation turned to the Church and the Eucharist and that her hostess talked about that, even though she had left the practice of the faith, she still thought that the Eucharist was a wonderful “symbol.” Having heard enough, Flannery recounted: I then said, in a very shaky voice, ‘Well, if it’s a symbol, to hell with it.’ That was all the defense I was capable of but I realize now that this is all I will ever be able to say about it, outside of a story, except that it is the center of existence for me; all the rest of life is expendable.

May we have the same grace that Flannery O’Connor did to recognize just how vital the Eucharist is for us. The Eucharist has been the strength of martyrs, it has comforted the faithful over the centuries in the face of adversity, it is the source and summit of our life of faith, and the remedy for our mortality that will lead us to everlasting life. May we always approach the altar to receive this most precious gift with worthy hearts and lives.