This Tuesday, August 27th, is the liturgical remembrance of St. Monica, the mother of St. Augustine. If you have a chance to visit Rome, go to the Church of St. Augustine off of the Piazza Navona and there you will find her tomb, where her relics were brought to Rome in the fifteenth century.

St. Monica was born in modern day Algeria in the fourth century. Her life was marked with both tears and faith-filled devotion. Monica, a devout Christian, married a pagan named Patricius who was known for his fierce temper, which he apparently got from his mother who lived with the couple after their marriage. Tradition tells us that the tempers of both Patricius and his mother constantly flared at each other, robbing St. Monica of much peace. The couple had three children, two boys and a girl, Augustine being the eldest.

Patricius died when Augustine was seventeen, both Patricius and his mother having been successfully converted to Christianity by St. Monica one year earlier. Monica’s tears, however, were not at an end. Augustine was sent to school in Carthage after his father’s death. Still having never been baptized because of his father’s earlier refusal, Augustine fell into the false religion of Manicheanism while there.

From the time Augustine arrived in Carthage, his life continued on a trajectory contrary to the Christian life. At Monica’s behest, Augustine ended a fifteen-year affair that he had with a woman, which produced a son, Adeodatus. Augustine agreed to an arranged marriage that was to take place in two years’ time, but the Lord had something else mind. The following year, at the age of 31, after years of prayers and tears on the part of Monica, Augustine was converted to the faith by the grace of God and the spiritual care of St. Ambrose, bishop of Milan. Later, Augustine would eventually be ordained a priest and bishop. 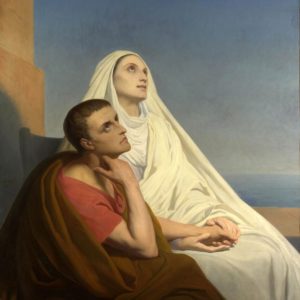 Following his baptism, Monica and Augustine believe that the Lord was calling them to spread the faith in Africa, but six months later, as the pair were making their way to the continent, Monica died just outside of Rome. In his great autobiographical work Confessions, Augustine recounted one of their final conversations as his mother was dying. Monica said: Son, as far as I am concerned, nothing in this life now gives me any pleasure. I do not know why I am still here, since I have no further hopes in the world. I did have one reason for wanting to live a little longer: to see you become a Catholic Christian before I died. God has lavished his gifts on me in that respect, for I know that you have even renounced earthly happiness to be his servant. So what am I doing here?

By all accounts, Augustine had lived a life void of God for much of his younger years, but Monica never gave up hope in the Lord’s power to save. At a time of the Lord’s choosing, the hardness of Augustine’s heart was broken and he would eventually become one of the greatest theologians and saints in the Church’s history. I offer this short sketch of Monica’s life with her son Augustine especially for those parents who are grieved by their children’s lack of practice of, or departure from, the faith. Many times through the years I have been asked by parents in this situation what they should do and my response has always been based on St. Monica’s actions: love them, pray for them, and continue to be an example of faith for them.
This Tuesday evening, August 27th, as the Church celebrates the memory of St. Monica, we will offer a special holy hour in the Cathedral at 7PM for children, and for their parents, who have fallen away from the practice of the faith. As we will be spending this time in prayer before the Lord in adoration of the Blessed Sacrament, I have no doubt that St. Monica, St. Augustine, our Blessed Mother, St. Joseph, and all the Saints will be offering their prayers as well from their places in heaven for these special intentions.

In remembering St. Monica the Church prays: O God, who console the sorrowful and who mercifully accepted the motherly tears of Saint Monica for the conversion of her son Augustine, grant us, through the intercession of them both, that we may bitterly regret our sins and find the grace of your pardon. Through Christ our Lord. Amen.