When I was finishing my graduate studies in theology, I imagined that I would spend my days as a theologian in an office surrounded by leather-bound books pouring over the translation of a particular Scripture passage, or I’d be in a classroom scrawling on a dusty chalkboard some phrase in Classical Hebrew script, or I’d be lecturing in a hall about the historical-critical method’s place in the rich history of biblical hermeneutics. It’s funny now, I think I imagined myself as a feminist theologian version of Indiana Jones.

I never thought that I would spend an inordinate amount of my adult life repeating the same phrase over and over and over again: “Get in your car seat!” Most of the time, it was followed with an affectionate “Please?” Sometimes it was followed with an equally affectionate “Or else.” Nevertheless, I found myself repeating this phrase multiple times a day to multiple children. As life would have it, I ended up taking a different route than I had earlier imagined: teaching theology to high school students, volunteering in youth ministry, falling in love, getting married, having kids . . . very un-like Dr. Indiana Jones. I wouldn’t change a thing, but sometimes I struggled to find the greater meaning in my day-to-day challenges as a parent of two toddlers.

Like many parents, the car seat is where I had some of my biggest battles. Physically, emotionally, mentally—the car seat was our daily battleground. I, the parent, fought for the virtues of safety, order, responsibility, and obedience. My children fought for independence, comfort, control, and (I think, sometimes) just for fun. It was on one particularly hot August day in the middle of a busy grocery store parking lot that a thought occurred to me. 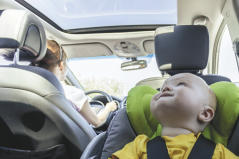 “Georgie,” I say, “can you get in your car seat so I can buckle you up?” “Mmm. No.” (Not surprising, but at least she made it seem like she was considering my request.) “G,” I continue as sweetly and calmly as possible, “would you like me to teach you how to work the buckles so you can do it all by yourself?” Her five-year-old eyes lit up. “Yeah!” she said as she practically jumped into her car seat.

So I taught her. I spent the next ten minutes or so showing her how to work her arms into the straps, which metal pieces go into where, how to listen for the “click,” and how to check to make sure she’s in safely. I let her do everything—even when it was ninety degrees, someone was waiting for my spot, it took her little hands two minutes to get the latches to engage, and my threeyear- old had broken into a box of goldfish crackers. I wanted to give her ownership of the process and that meant I had to step back a little. Now, before you report me to CPS, of course, I also verified that she was in safely, but only after she was finished. If she missed something, or if an adjustment had to be made, I lovingly pointed it out and allowed her to fix the problem before offering help. The point was that she was now armed with the information, she was in control, she had the ability to do it on her own.

My Instagram-worthy teaching moment had passed and, alas, I was never awarded that “Parent of the Year” trophy when I got home. However, the next morning when it was time to go to the library something wonderful happened. Georgie walked to the car, climbed into her car seat, and buckled herself in. She did the same thing later that afternoon, and again that evening, and all the next day. Every time she would proudly proclaim, “It’s okay Mommy, I got this.” Seriously, where was that trophy? But it’s what happened next that really made me stop and think. Georgie started to ask questions: she wanted to know why she had a special seat in the car, who made the car seat, how does it work, why is it against the rules for her not to use one, when could she sit in the front seat? She was going deeper into her understanding of this daily ritual. And so we had conversations. 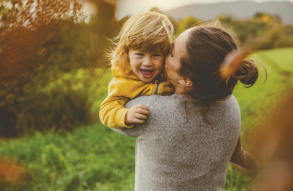 We talked about the whys and the hows surrounding this small but meaningful part of her life. And then? She started sharing her newfound knowledge . . . to everyone. Her teachers, the lady at the bank, our neighbor walking his dog: Georgie would stop them all and say, “I buckle myself into my car seat. It’s important. It’s the law because it keeps me safe. Do you want to watch?” The other afternoon, she turned to her sister and asked, “Clemmy, would you like me to teach you how to buckle your car seat? I can show you. It’s a little tricky but I think you can do it.” She had come full circle. A month earlier she had no control; she was forced into this daily procedure with no say of her own. But now? She had become a teacher. By allowing my daughter to participate in the car seat “ritual” on her own, to ask questions, and to share her knowledge, she now felt in control and grew to enjoy the process—even to the point where she wanted to help others find that joy.

I thought to myself: Shouldn’t evangelization and catechesis be the same as these car seat negotiations?

As evangelizers, and additionally as catechists, shouldn’t we take a similar approach to bringing people into the faith—especially when it comes to children, youths, and young adults? As any well-seasoned parent will tell you, a surefire way to turn any kid off from something is by telling or, even worse, forcing them to do it—much like my struggle with the car seat. How can we get the unchurched/de-churched/unaffiliated as excited and passionate about the faith as my daughter now is about car safety? I think the answer lies somewhere at the intersection of giving up a little control, modeling the faith with intention, patience, and grace. We have immense challenges ahead of us when it comes to evangelizing the younger generations today. They are incredibly headstrong and independent—difficult to convince unless it originates as their own idea. This is due, in part, to both their biology and the culture of their generations—factors that we have no real control over. While this “hands-off” approach may not appeal to older generations, the facts of our situation are clear: we need to change our approach if we want to grow the young Church. This doesn’t require a dumbing down of the doctrine nor does it mean ignoring or fundamentally changing Church teaching—it requires us to adapt our evangelizing/teaching style to one that suits the culture.

Obviously, putting a child in a car seat and fostering their Catholic faith are entirely different things, but the way that I choose to approach them is the same: I allow my children to have some sense of ownership, some control, and some sense of understanding rather than force them to complete the task that they do not fully understand. This puts a lot of pressure on me as a parent and teacher. I need to have the patience, I need to take the time, and I need to have the answers to their questions (or at least be able to look them up online). Truthfully, it might be easier to just say “Do it” or “Because I say so,” but then the end result is not the same: the child is in their car seat and the rosary is said, but they have learned to resist or even hate the process because they are forced to do it. I cannot help but wonder what it would look like if we adopted the same approach with the evangelization and catechesis of our young adults today. Would the attention to the sacraments change, would youth participation in the Church be increased, would belief in Church teachings be stronger, would the practice of the rosary or Eucharistic Adoration be more commonplace if we adopted this different teaching style?

Kelly Tramontin is a professional wife, mother, theologian. She studied Theology at Loyola Marymount University where she earned her Masters degree in 2010. She currently lives in Los Angeles with her husband and two daughters.