One of my earliest memories is that of wonder as I clomped out, cocooned in boots, snow-pants, coat, and gloves, into our snow-covered backyard as my dad shoveled a walkway to the garage. It was the most snow I had ever seen – about a foot I guess – and I was only a few years old, so the piles of frozen flakes reached beyond my waist. It wasn’t quite Israelites-through-the-Red-Sea astonishing, but the memory sticks in my mind strongly to this day. Perhaps now I find the onset of cold weather less thrilling than I did as a 4-year-old, but I still am struck by wonder each year with the first snowfall. Only God can recreate an entire landscape over the course of an hour as He does with a snowfall, painting and purifying the grime and grayness of November away with the heaven-sent flurries that filled the sky these past weeks. This week, with plenty of winter confronting us outside, I wanted to take a glance through scripture to see what it might reveal to us of God.

The purity of a fresh snowfall is the image called upon by the repentant David in Psalm 51 as he begs the Lord to forgive the ugly selfishness of his adultery with Bathsheba and murder of Uriah, her husband. It evokes not just a request for pardon, but his beseeching prayer that his heart might be recreated in the Lord’s love. “Purge me with hyssop, and I shall be clean; wash me, and I shall be whiter than snow.” Even the purity of snow falls short in describing the Lord’s forgiveness. His redemption is not just a covering over of our sins, but a renewal of ourselves to their depths, especially in those places of our hearts wounded and warped by sin. Isaiah uses the same image, but now the snow-filled-sky become a pledge from God Himself of salvific forgiveness: “though your sins are like scarlet, they shall be as white as snow” (Isaiah 1:18). As angels filled the December sky above Bethlehem, this promise began to be fulfilled, and it is in the glorious brilliance of Christ transfigured on Mt. Tabor, and the snow-white angels standing by the tomb on the morn of the Resurrection, that mark the definitive advent of Divine redemption.

More astonishing than a state-wide cleansing God completes with an afternoon snow flurry is the transformation He brings about our souls through the supernatural cleansing in one confession. And even more joyous than the most perfect of snowfalls is the rejoicing of all of heaven when we come to Him with repentance!

Psalm 148 transposes the blustering of winter weather into a hymn of praise to the Lord. “Praise the Lord from the earth, you sea monsters and all deeps, fire and hail, snow and frost, stormy wind fulfilling his command! Mountains and all hills, fruit trees and all cedars! Beasts and all cattle, creeping things and flying birds!” Our praise, the psalmist admonishes us, is not merely a spiritual or interior one, but includes and joins with the tangible and visible praise of the natural world. Yet our prayer can be even more inspired by the greater beauty of creation in its continual correspondence with God’s providential will. Just as “even the wind and seas obey Him”, so our praise gives even greater glory to God when it is not only an act of piety and adoration, but of obedience. As our worship corresponds more and more closely to His revelation and example, re-presenting His Sacrifice, in memory of Him, our earthly lives are transposed more and more to the worship of heaven. 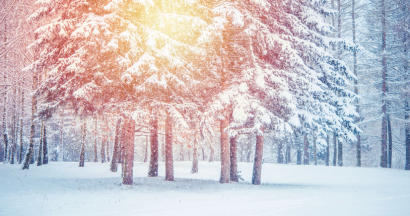 Just as snow does more than cover over a cityscape, but actually is a small way of creation following the will of its Creator, so snow and frost image not only God’s desire to purify and cleanse our lives, but the bringing of our lives and hearts into conformity with His. Man, made in God’s image and likeness, with His grace is not only re-created in that original image, but invited to do so in obedient freedom. Our lives become a splendid icon of God Himself.

As we close in on our last weeks of this liturgical year and our readings look ever more towards the definitive, glorious, second coming of Christ marked by “awesome sights and mighty signs … from the sky”, perhaps our recent surprising snowfalls could be a reminder of His loving desire to come now, today, into our hearts and lives.

For as the rain and the snow come down from heaven, and do not return there but water the earth, making it bring forth and sprout, giving seed to the sower and bread to the eater, so shall my word be that goes forth from my mouth; it shall not return to me empty, but it shall accomplish that which I intend, and prosper in the thing for which I sent it (Isaiah 55:10–11).

Father Dominic Rankin is a Parochial Vicar for the Cathedral of the Immaculate Conception.