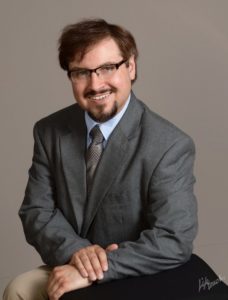 Because of Jesus’ sharing of his intimate life of prayer, we know that God is Trinity. Hinted at under various guises in the Old Testament, the Trinity is spoken of in a direct way in both the Gospels and the New Testament epistles. The Church later articulated what we know about it in clear and precise terms. The Trinity, a communion of divine Persons in utter unity, unveils an eternal foundation to what we mean by saying “God is love.” Nevertheless, the Trinity cannot be fully grasped, because God is mystery, far above human comprehension.

The Relationship of the Father and the Son
According to the Catechism of the Catholic Church, “In the Old Testament, “son of God” is a title given to the angels, the Chosen People, the children of Israel, and their kings” (no. 441). Yet the Gospels speak often of Jesus as the Son of God in an altogether new and unique sense. Before Jesus’ birth, the angel Gabriel said to Mary that Jesus “will be called son of the Most High” (Luke 1:32). At his finding in the Temple, the boy Jesus spoke of being in God’s Temple as being “in my Father’s house” (Luke 2:49). We find that the devil even tempts Jesus later by saying, “If you are the Son of God, command this stone to become bread” (Luke 4:3).

In John’s Gospel, Jesus speaks more directly of what is meant by his unique Sonship:

“For God so loved the world that he gave his only Son, so that everyone who believes in him might not perish but might have eternal life” (John 3:16).

Also, “Whoever has seen me has seen the Father…. Believe me that I am in the Father and the Father is in me, or else, believe because of the works themselves” (John 14:9-11). Thus Jesus’ divine Sonship is completely unique. The Church understands the Son to proceed eternally from the Father, who is the origin in the Godhead, though the two Persons are equal in divinity.

When Jesus prays, he converses with his Father. In his High Priestly Prayer, he prayed,

“Righteous Father, the world also does not know you, but I know you, and they know that you sent me” (John 17:25).

When he raised Lazarus, “Jesus raised his eyes and said, ‘Father, I thank you for hearing me. I know that you always hear me; but because of the crowd here I have said this, that they may believe that you sent me’” (John 11:41-42).

The term abba is well-known, even though it is only found once in the Gospels. It is an Aramaic term Jesus used to express particular affection and intimacy with his Father. It is recorded on the lips of Jesus only at his agony in the garden, where he prayed,

Typically the Gospels, written in Greek, use the standard Greek word for father—pater. But Jesus’ original use of abba certainly made an impact on the early Christian consciousness since it was carried over twice in the epistles, also as “Abba, Father” (Romans 8:15; Galatians 4:6).

When the disciples asked Jesus for advice in prayer, he instructed them to address God as “Our Father in heaven” (Matthew 6:9). Here Jesus, the natural and eternal Son, shares his Father with us, the Father’s adopted children. Thus in the Liturgy, the Lord’s Prayer is introduced by these words: “At the Savior’s command and formed by divine teaching, we dare to say: Our Father …” As the Catechism teaches, we only address God as our Father; only Jesus may address God as my Father (no. 443). For this reason, St. Paul writes, “For you did not receive a spirit of slavery to fall back into fear, but you received a spirit of adoption, through which we cry, ‘Abba, Father!’” (Romans 8:15).

In the Spirit
As St. Paul writes above, it is only in the Spirit that we may cry, “Abba, Father!” He continues, “In the same way, the Spirit too comes to the aid of our weakness; for we do not know how to pray as we ought, but the Spirit itself intercedes with inexpressible groanings. And the one who searches hearts knows what is the intention of the Spirit, because it intercedes for the holy ones according to God’s will” (Romans 8:26-27). This is what Jesus meant when he said, “I will ask the Father, and he will give you another Advocate to be with you always, the Spirit of truth, which the world cannot accept, because it neither sees nor knows it. But you know it, because it remains with you, and will be in you. I will not leave you orphans; I will come to you” (John 14:15-18).

Jesus promised to come to the disciples in the Holy Spirit (for more on this subject see my article “Why Jesus Had to Ascend to Heaven”). The Holy Spirit would remain with the disciples, intercede for them, convict them of sin, remind them of Jesus’ teachings, comfort them, and help them grow in his ways. Jesus said to his disciples,

“But when he comes, the Spirit of truth, he will guide you to all truth. He will not speak on his own, but he will speak what he hears, and will declare to you the things that are coming” (John 16:13).

Further, the Holy Spirit would absolve them of sin, utilizing the ministry of the Church. Thus, the risen Christ breathed on the apostles and said, “Receive the holy Spirit. Whose sins you forgive are forgiven them, and whose sins you retain are retained” (John 20:22-23). The Holy Spirit would also be the force propelling them to salvation. As St. Paul writes, “If the Spirit of the one who raised Jesus from the dead dwells in you, the one who raised Christ from the dead will give life to your mortal bodies also, through his Spirit that dwells in you” (Romans 8:11).

Defined by the Church 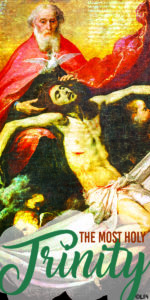 As Christians, we have learned to read Scriptures relating to the Father, Son, and Holy Spirit in light of the doctrine of the Trinity. This is an example of reading Scripture according to the analogy of faith (Catechism, no. 114). The early Christians understood the Trinity intuitively by faith, but they were not yet able to plainly articulate it. They could, however, sense heresy when something was awry in an interpretation. Out of controversies and debates and aided by the guidance of the Holy Spirit, the Church came over the course of several centuries to the full doctrine of the Trinity. Along the way, the Church even developed the term person as we use it today to speak of an individual of a rational nature. The doctrine of the Trinity states that there is one God, three distinct equal divine Persons – Father, Son, and Holy Spirit.

Jesus told his disciples, “Everything that the Father has is mine” (John 16:15). Thus at the Council of Nicea in 325, the bishops defined that the Son is consubstantial with the Father. The bishops professed belief “in one Lord Jesus Christ, the Only Begotten Son of God, born of the Father before all ages. God from God, Light from Light, true God from true God, begotten, not made, consubstantial with the Father; through him all things were made.” The bishops at Nicea were satisfied to simply profess belief “in the Holy Spirit” until heretics took advantage of the lack of definition to falsely teach that the Holy Spirit is a creature. Thus the First Council of Constantinople in 381 further professed belief “in the Holy Spirit, the Lord, the giver of life, who proceeds from the Father and the Son, who with the Father and the Son is adored and glorified, who has spoken through the prophets.”

The Trinity gives expression to the revolutionary statement from the First Letter of John—“God is love.” There we read, “We have come to know and to believe in the love God has for us. God is love, and whoever remains in love remains in God and God in him” (1 John 4:16). The Father, Son, and Holy Spirit permeate that chapter, lending us the interpretation that God is love because God is Trinity. The mutual love of the Father and the Son eternally bring forth the Holy Spirit; by God’s wise and loving decision, he shared this goodness with creatures.

Love in God is an eternal relationship into which he draws us. For Jesus in the Gospels, the Trinity is a relationship of unspeakable love. Thus, far beyond a mere formula, the Trinity is one of the most fundamental beliefs of the Church and is the mysterious reason that stands behind the countless loving works of God. with the poor being served as if they were at a restaurant – probably a common experience for many people but not so common for the poor. How we do things is important. Can we look at what we do, can we tweak it in such a way that dignity is acknowledged and therefore friendship is possible? It may take a little more effort, a little more creativity on our part to “structure in” for the possibility for friendship but this little bit extra does set a truly important tone and perspective.

Michael J. Ruszala is the author of several religious books, including Lives of the Saints: Volume I and Who Created God? A Teacher’s Guidebook for Answering Children’s Tough Questions about God. He holds a master of arts degree in theology & Christian ministry from Franciscan University of Steubenville. He has served for a number of years as a parish director of religious education, parish music director in the Diocese of Buffalo, and adjunct lecturer in religious studies at Niagara University in Lewiston, NY. For more information about Michael and his books, visit michaeljruszala.com.