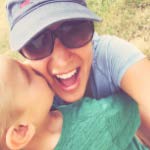 I once sat behind an older man who was angry because our then-3-year-old was talking in church. The man spent the entire Mass huffing and puffing, visibly rolling his eyes, and shooting dirty looks at us. As if that didn’t make me feel bad enough, at the sign of peace, he refused to shake any of our hands, or even make eye contact. Embarrassment turned into anger as we left, and I let his attitude of disapproval get the best of me for the rest of the day.

Whenever I write about kids being distracting at Mass, someone always comments that it’s because parents don’t discipline or teach kids how to behave.

Their kids behaved in Mass.

Their neighbor’s friend’s second cousin has a 3-year-old who is so pious, they canonized her right after Mass at doughnuts and coffee in the hall!

For years, I dreaded Sunday mornings. I tried to talk myself out of going to Mass so we wouldn’t have to bother with any of it. Each week, my husband reminded me that we needed to go, and our very normal kids were just being kids.

Sometimes, people were thoughtful and kind. We once had an older couple ask to hold our son. We let them, and he sat and quietly played with the woman’s necklace for the remainder of Mass. Another woman stopped us to say she enjoys watching our family every Sunday. We’ve had people lean over and tell us we’re doing a great job even if our family had been one elephant short of a circus (we have plenty of clowns). But, I can probably count on one hand the times I’ve felt affirmed for bringing my kids to Mass compared to the times we’ve visibly bothered other people.

I think I speak for a lot of parents when I say that I wish people were more patient and understanding. Our kids have a right to be at Mass. As baptized members of the faith, they are part of the Catholic community, and they’re the future of the Church.

Families are not trying to be disruptive. We don’t want to take away from the Mass, but we also don’t want to teach our kids that all they have to do is be loud and we’ll take them out of the church. I understand many parishes have cry rooms, but by sitting in the chapel, most of us want to set an example for our kids of how to behave. We want them to see what goes on, be a part of the congregation, and understand what’s expected of them so they can learn the routine. Our kids can’t learn how to behave in Mass if they are never in Mass.

I liken this season of life with small kids to a test of patience and perseverance. Like a dark night of the soul, I’m often left feeling blah about attending Mass. I get nothing from the readings and homilies most weeks because I’m interfering with my child to stop dropping the hymnal, or telling him to be quiet so people around him can pray. I’m faced with the choice to give up on Mass because it feels like going through the motions: I can surrender to the temptation of just staying home (because it’s easier), or persevere (despite the dry feeling I often have).

Sometimes all we have when it comes to our faith is perseverance, especially when it’s hard. If I stop going to Mass because my kids are little and loud, or busy and distracting, I set an example for them that church isn’t important. If I quit, I will have failed God, who entrusted my children to me so that I could love them and raise them to love him.

When we baptized our children, we promised we would raise them in the faith. I have come to understand that motherhood is my vocation and a huge part of that is to make sure my kids have a foundation in their Christian faith. Even though they don’t seem to be doing much praying during Mass, they are immersed in prayer. (I know because our 5-year-old sometimes recites snippets of the creed when he plays with his trucks.)

My hope is that people will grow to make families with little kids feel more welcome. We should not only embrace young families at Mass, but celebrate them. We have to nurture our community or there won’t be one.

My hope is the next time someone finds themselves getting annoyed by someone’s child, they ask God to show them how they can serve these people. Maybe a friendly smile is all it takes to keep that family coming back and not giving up on their faith because they’re made to feel like an annoyance. I often think back to the kind couple who held our son at Mass. I don’t think they realized how meaningful their gesture was. For the rest of that Mass, we felt like we were part of a community of people who embraced our family. It was refreshing.

So, you never know, maybe your gesture really is the first step in the future canonization of one of these little ones. Or, maybe you’ll just befriend the family and have new friends to eat doughnuts with in the hall after Mass.

Christina Antus lives with her husband and her three cute, but noisy, kids. When she’s not writing, she’s running, reading, folding forever-piles of laundry, and probably burning dinner. You can read more of Christina’s writing at www.heykristeenuh.com/