Christians, to the Paschal Victim

A Lamb the sheep redeems;

Christ, who only is sinless,

Reconciles sinners to the Father.

Death and life have contended in that combat stupendous:

The Prince of life, who died, reigns immortal.

What you saw, wayfaring.

“The tomb of Christ, who is living,

The glory of Jesus’ resurrection;

The shroud and napkin resting.

Yes, Christ my hope is arisen;

to Galilee he goes before you.”

Christ indeed from death is risen, our new life obtaining.

Have mercy, victor King, ever reigning! 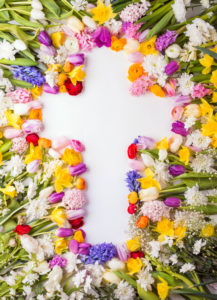 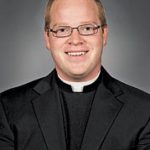 This ancient hymn, the Victimae Paschali Laudes, is one of only a few “sequences” still in use in the Catholic Church today. A sequence— for your Catholic trivia file—is a hymn traditionally sung just before the Gospel proclamation. Before the reforms of the Mass in 1570, there were many such hymns on feast days and solemnities throughout the Church year. The current Roman Missal has only three: the above sequence for Easter, the Veni Sancte Spiritus for Pentecost, and the recommended (i.e. optional) Lauda Sion for the Solemnity of Corpus Christi.

The Easter Sequence is one of my absolute favorite pieces of prose in the entire Church year. Traditionally, the hymn is dated to the 11th century, one millennium after Christ’s Resurrection and one millennium from our current day. As such, it’s not only a beautiful hymn, it’s a sort of “bridge of faith,” connecting our belief down the centuries to the faith of the Apostles on that Easter morning, when the dawn from on high had only just begun.

Take a few moments to read this beautiful hymn, proclaimed proudly to believers this and every Easter (better yet, find a version of it on YouTube and listen to it!). It speaks in simple words an almost unfathomable reality: Christ, who alone is sinless, reconciles us to the Father! Death and life have fought for us in these days, my brothers and sisters, but the Prince of Life has conquered—not will conquer, but has conquered, definitively, once and for all, this nighttime of our fears.

And now, in the light of Easter morning, our hope indeed has risen. Postured again before the empty tomb, having lived a more realistic Good Friday and Holy Saturday than we ever could have imagined, we stand amazed, realizing once again what it is we truly live for.

Our Lord’s Resurrection, I pray, is as real to you today as it is to me. I pray the light of this Easter morning sheds light and glory on the struggles of this past Lent. And I pray that with this new dawn, the grace of the Lord’s favor will once again shine on His pilgrim people: we who live in this world, but who have long hoped for a world not yet completely our own.

Christ indeed from death is risen, brothers and sisters! May our King, ever reigning, come to meet us in His glory and bring us at last to life with Him and the Father, in the unity of His Holy Spirit. Amen, alleluia!

Father Michael Friedel is a Parochial Vicar at the Cathedral and Chaplain at Sacred Heart Griffin High School.