We welcome you to the 2020 Cathedral Concert Series at the Cathedral of the Immaculate Conception in Springfield, IL. We welcome guests from across the Springfield region and beyond. We invite talented local and national musicians to this sacred space. The music that we perform will engage all your senses and provide an opportunity for spiritual and cultural enrichment. The concert series is open to anyone and at no cost. 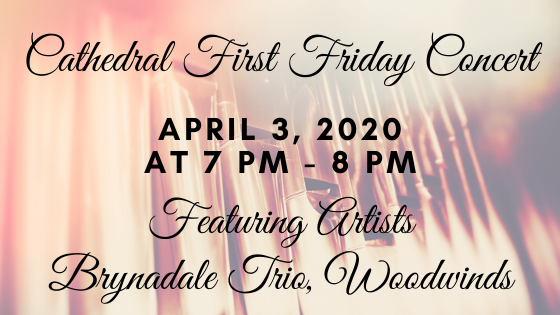 Sacred Sounds, Sacred Spaces at the Cathedral will host a First Friday Concert on April 3rd, 2020 at 7PM featuring the Brynadale Trio! Brynadale is a woodwind trio that includes the flute, clarinet, and bassoon. This concert is FREE and open to the public. 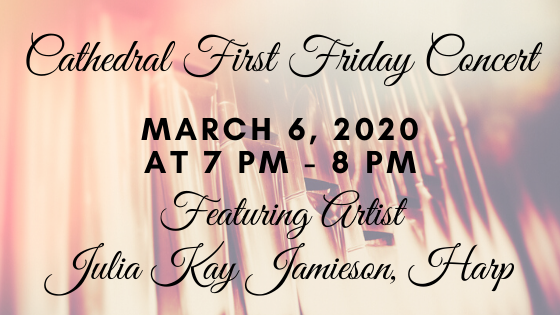 Sacred Sounds, Sacred Spaces at the Cathedral will host a First Friday Concert on March 6th, 2020 at 7PM featuring Julia Kay Jamieson on the Harp! This concert is FREE and open to the public.

Sacred Sounds, Sacred Spaces at the Cathedral will host a First Friday Concert on February 7th, 2020 at 7PM featuring Jaime Escatel on Trombone and Mark Gifford on Piano. This concert is FREE and open to the public. 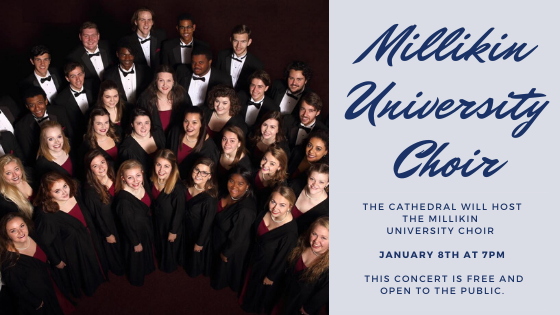 Sacred Sounds, Sacred Spaces at the Cathedral will host the Millikin University Choir January 8th at 7PM. This concert is FREE and open to the public.

Yona is Associate Professor of Ethnomusicology and Director of the Music
Program at the University of Illinois Springfield. She performs as violinist with a
number of ensembles including the Illinois Symphony Orchestra and the Athens
based Greek folk ensemble, Rebetiki Istoria. Her scholarly publications include
articles about Greek rebetika music and music and social-justice pedagogy.Dr.
Stamatis is the music director of the University of Illinois Springfield Orchestra. 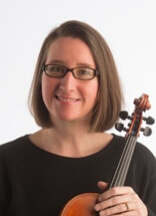 By day, Megan is an assessment consultant with the Illinois State Board of
Education. She began violin lessons at age 10 in the public schools and was
persuaded to try viola in high school (since there were NO violists). Over the
years, being a violist has afforded her many opportunities to perform in
numerous orchestras and ensembles throughoutIllinois, and she is currently
principal violist of the Sangamon Valley Civic Orchestra. In addition to the
musical highlight of having joined Mark Gifford for some Sunday morning music,
she also had the awesome opportunity to participate in a summer music festival
in Verbier, Switzerland. Megan feels blessed to play music with such talented
colleagues and gives a nod of appreciation to Laura LaCombe, founder and
former violinist of LLSQ. 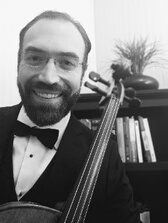 Chet Lord-Remmert currently serves as the Operations & Personnel Manager for
the Illinois Symphony Orchestra. With a passion for music making, he regularly
performs with a variety of central Illinois orchestras and chamber ensembles,
including the Lincoln Land String Quartet, Blackwater String Ensemble,
ProMusica Ensemble, Millikin-Decatur Symphony Orchestra, Sangamon Valley
Civic Orchestra, and Jacksonville Symphony Orchestra. Mr. Lord-Remmert also
serves as the organist and pianist for First Presbyterian Church in Lincoln,
Illinois. He holds a bachelor’s degree in Music Performance from
MillikinUniversity and is a member of the Beta Theta chapter of Phi Mu Alpha
Sinfonia.

Join us at the Cathedral and enjoy Bill Mitchell on trombone and Mark Gifford on piano. First Friday Concerts are free and open to the public. See you there!

"Impromptu in D Flat" and
"Earth".
Both composed by Edward 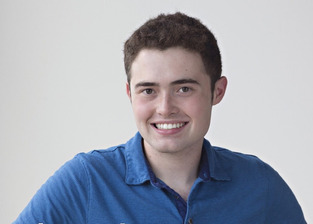 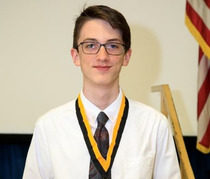 Nocturne #20"
Prelude in C minor
Both are composed by Chopin 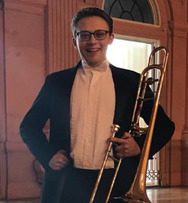 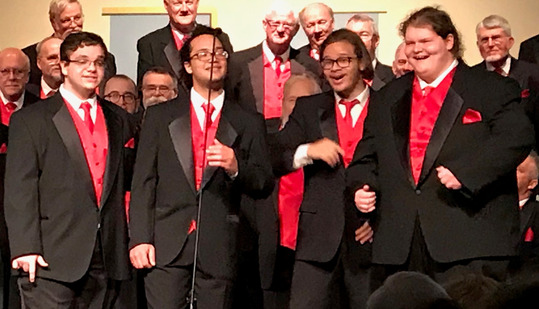 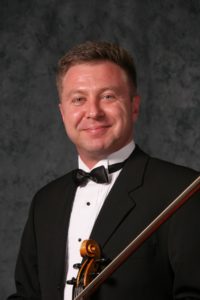 Mr. Kamen Petkov began studying violin at age of 7 at the school of music in his home town Gabrovo, Bulgaria. He continued his violin studies with Professor Nokolai Genov at the specialized music school "Professor Vesselin Stoianov" Russe, Bulgaria. In 1991 he was enrolled at the "Johann Strauss" School of Music in the capitol of Republic of Malta, Valletta where he continued his studies in Violin Performance and Chamber Music under the guidance of Professor Joachim Attanasssov and Mario Bisazza.

Since 1994 Kamen Petkov resides in the United States of America. He holds a Bachelor's degree in Music Business from Southern Illinois University at Carbondale as well as Masters of Music in violin performance from the same institution under the guidance of Professor Michael Barta.

Mr. Petkov has performed extensively solo and chamber concerts and recitals in Bulgaria, Malta and the United States.

In addition to his career as an active musician/violinist Mr. Petkov pursues a career in Arts Management. His experience includes practical training with the management of the world renown orchestras such as Chicago Symphony and St. Louis Symphony Orchestras as well as four summers spend in the Artistic and Operations Departments of the only municipally funded music festival in North America, Grant Park Music Festival at the Millennium Park in down town Chicago, Illinois.

Mr. Petkov has served as a Director of Operations and Personnel for the Illinois Symphony and Chamber Orchestras for almost 10 years.

In the summers of 2007, 2008, 2013 and 2015 Mr. Petkov has organized and served as the Executive Director of the “International Chamber Music Festival and Concert Tour – Bulgaria”, establishing a multi-cultural musical bridge for young people and professionals between his home country Bulgaria and the USA.

From 2009 to 2012 Mr. Petkov was the Personnel Manager and a violinist for the Peoria Symphony Orchestra, Peoria, IL.

Mr. Petkov is the former President of the Medici Chamber Music Society of Illinois, a non-for-profit organization established to promote chamber music.

Mr. Petkov has been featured in two editions of the book by Milka Purel " Gabrovians of the 21 Century", published in his native town Gabrovo, Bulgaria.

Mr. Petkov performs on a violin made by Janos Spiegel in 1924 and a bow by Lewis and Son (UK). 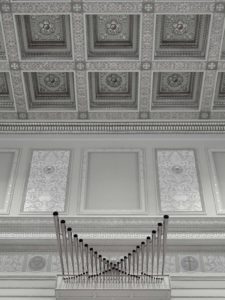 Symphony Orchestra. Brad is a recipient of the ISU Mary Jo Brown Scholarship for outstanding service to the department of music and exceptional musical talent, the Lemont Township High School music department award, a director's award from Old Quarry Middle School, and is a three time winner of the Illinois Music Education Association Composition Competition. 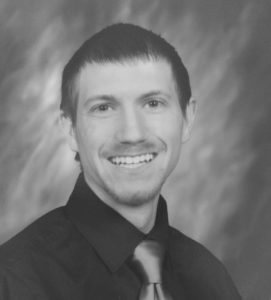 Kara Mernaugh, née Robinson, is a Springfield native and has served as a music minister for the Diocese of Springfield since 1994. By day, Kara is the Ed360 Outreach Coordinator at the Illinois State Board of Education. In addition to music ministry, her personal passions include being the Communications Director for Team RWB Springfield, as well as the Family Readiness Group Leader for the 129th Regional Training Institute at Camp Lincoln. Kara and her husband, Seth, are proud fur parents to Dakota and Dolce.

Mark Gifford, accompanist, is the Director of Music and Organist of the Cathedral of the Immaculate Conception. He is the coordinating director and host of First Friday Concerts.February 1, 2019 at 7:30 PM

Join the Cathedral for the launch of the First Friday Concert series. The February concert features guest artist, Lukas Hasler. Lukas Hasler (born in 1996) is currently studying organ at the University of Music and Performing Arts in Graz, Austria and cultural management at the University of Hamburg, Germany. In addition to his participation in the opening ceremony of the Salzburg Festival, he has already performed at the Tyrolean Festival Erl as well as at the International Organ Festival in Düsseldorf. Lukas has won the “Prima la musica” competition for organ twice. The second time, he also won the “Bärenreiter-Special” prize for his interpretation of a work by J. S. Bach. A year later, “Jugend komponiert”, a competition for young composers, named Lukas as a finalist for his piano and violin suites. The 22-year-old organist, composer and choral conductor has attended master classes with Jean Guillou, Ton Koopman, Ludger Lohmann and Skip Sempé. Lukas is gaining recognition for his colourful and passionate musicality. He has performed many organ recitals in Austria, as well as internationally in Germany, France, Israel, the United Kingdom and the United States. For 2019, his plans include performances in Chicago, Los Angeles, Stuttgart and Moscow.
www.LukasHasler.com 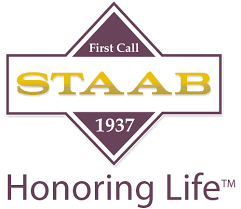